Stock markets are at their all-time highs, which means thinking about a fixed income fund or other product might seem unnecessary.

Chances are, your money has been growing at a consistent pace as the markets continue to climb higher and higher.

You may think that now would be a crazy time to get your money out of the stock market, but would you be right? Let’s consider a few things first.

Take a look at the charts below, for instance.

These are both graphic representations of the S&P stock market over a seven-year period. On the left, you’ll see the rise of the S&P during the “tech bubble” between 1993 and 2000. On the right, you’ll see the current upward trajectory of the S&P, starting in 2011 and running through 2017.

This seems to bode well for owners of S&P stocks, does it not? Well, if you’re old enough to remember how the tech bubble ended up, then you should know that 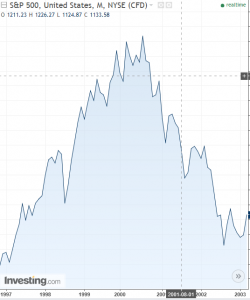 now is the time to be a little wary of that chart.

Here, let’s take a quick look at how that tech bubble played out. To the right, you can see that the bubble eventually (and dramatically) burst. The market

ultimately gave back all of the gains it made in prior years, turning into a bear market which lasted for three years.

Do you think you would have wanted to cash out at the market peak and instead go to fixed income assets before the inevitable crash? Maybe you did. Or, maybe you decided to ride the wave and gave back a hefty chunk of what you had made. Now that we see how past trends have played out, how do you think the current spike in stock markets will end up?

Now’s your chance to have the opportunity that you didn’t take advantage of before. Consider what you might want to do if the stock markets begin to fall down back to earth. Then would you try to get out? More importantly, would you be able to? Another important thing to consider is whether or not your savings would even be able to withstand the losses they might soon incur.

Take another look at the current upward trend of the S&P stock market above. Does it look stable and sustainable? 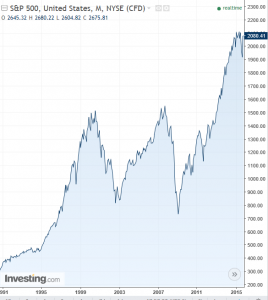 Not only is the current growth of the market at an all-time high, it’s also significantly higher than the peak of both the tech bubble and the credit bubble — on the left, you can see how both of those played out (note the significant valleys which followed the peaks).

So what should you do? People who leave the markets now must be strong-willed and have a big-picture approach. Chances are, everyone from your broker to your buddy will think you’re crazy by leaving a stock market that has increased so much over the past seven or so years.

However, if things play out the way we’ve seen them before — such as during the tech bubble or even the credit crisis crash in 2008 —then it’s fair to wonder whether or not you can get out of the market in time to salvage your retirement account.

Many thought they could as the markets started to drop in 2008, but even as we saw those markets continue to plummet, we saw a significant amount of investors who still did not close out their positions simply because they couldn’t stomach the loss. Instead, they became investors with a buy, hold, and pray strategy — which is not the approach you want to take with a strategic investment or retirement plan.

What Can You Do?

Now is the time to consider a fixed income asset, such as the Tactical Wealth Fixed Income Fund. We’re not claiming to have all of the answers, of course, but it might be wise to put your money elsewhere if past trends are indicative of our current stock market environment.

The last thing you want is to become trapped in positions that are rapidly losing value. Everyone has, or should have, their own investment exit rule — but you’d be wise to get ahead of the curve and make an exit before everyone else panics in order to have a chance at converting your investments into reliable, stable fixed income.

The fact of the matter is, once the market begins to plummet, you may not have a chance to exit. In order to successfully navigate the markets without getting burned, you have to take a chance — even if it means looking “crazy,” as others may put it — and exit the market before the crash.

By turning your investments into steady fixed income while you still have the chance, you’ll look like a genius after the crash.

Learn more about turning your investments into an asset on which you can count for years to come. Contact Tactical Wealth today to discover the Fixed Income Fund.